About us
Resources
Events
Ministries
Give
Hello. Your user experience on our site might be different because you are on Internet Explorer, switch to Chrome or Safari for a better experience.
May 18, 2022
·
Encounter 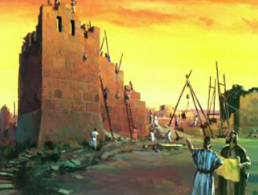 So many things seemed stacked against the work of Christ in our modern western world – need I point them out?? The direction of many of our leaders is away from God to self-sufficiency. There is no room for the message of Jesus. We are to do the work of the Lord but there are many who oppose.

I am reading in the great little book of Ezra these days – the account of the return of the exiles from Babylon to rebuild the temple and the city of Jerusalem. As they started the work in response to the God ordained decree through Cyrus of Persia, enemies around them wrote to a subsequent leader, smearing the Israelites and calling for a building halt – which was granted. So after setting the foundations of the temple with great joy, there were 18 years of non-activity, until Haggai, Zechariah and Zerubbabel began once again to build.

Once again, the enemy sent a letter to the new King Darius I but made a mistake of enclosing too much truth in the letter. Instead of shutting down the work, Darius sent back a letter to these opposers in one of the delightful turnarounds in the bible. Read Ezra 6 yourself but the gist of it was this:

“Do not interfere with the work on this temple of God…Moreover I hereby decree what you are to do for these elders of the Jews in the construction of this house of God:…Whatever is needed…must be given them daily without fail…Furthermore, I decree that if anyone changes this edict, a beam is to be pulled from his house and he is to be impaled on it…I Darius have decreed it. Let it be carried out with diligence.” From 6:6-12

So many things seemed stacked against the work of Christ in our modern western world – need I point them out?? The direction of many of our leaders is away from God to self-sufficiency. There is no room for the message of Jesus. We are to do the work of the Lord but there are many who oppose.

I for one am encouraged by the reading of this passage; to be reassured that God is not worried – that He has not somehow been pushed off of his sovereign throne – that His kingdom come is being thwarted by the puny efforts of rebellious men and women. No – God’s timing is perfect. If need be, He can speak through a donkey. He can use a pagan despot to ensure His work is built. Continue to seek His face and His timing dear brother/sister. He is on his eternal throne, where He always has and always will be!